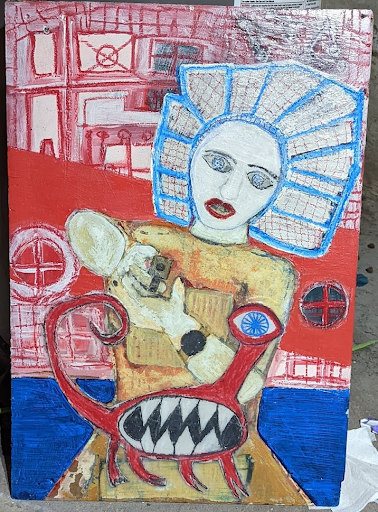 Basically the flag of Poland 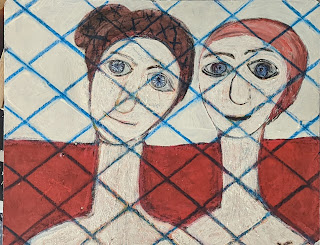 This is on a hunk of arborite attached to a thick piece of pressboard I'd been using in the kitchen for a while. Yeah, so two women looking out through a chainlink fence. I'm not sure what the setting is, though I gotta say it seems a bit oppressive.  Fence, oil pastel, acrylic, house paint, 20x14ins.
Post a Comment
Read more

I made this board(!) 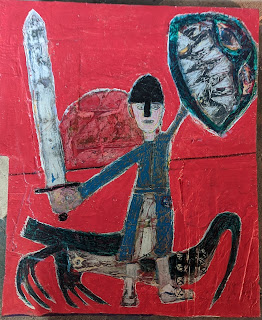 This painting -- Dragon, 25.25x30ins (irregular), acrylic, oil pastel, house paint, ballpoint pen,  pencil, and pieces of broken plastic -- is on four horizontal boards I glued, taped, and epoxied together to form one big board. Inspiration (more or less, and in no particular order): St. George, Kandinsky, and Murnau. Murnau the village south of Munich, not the horror film director. I think St. George, the dragon slayer, is its patron. The region also has a monster myth involving a creature that used to inhabit a local lake. And Kandinsky used to live in Murnau (with the painter Garbriele Munter)... ...where he painted stuff like this... ...and later this... ...on his way to stuff like this. So maybe my pic is a Kandinsky-inspired rendering of St. George slaying a dragon in Murnau, maybe it's not. Maybe it's a kid in his pajamas using his imagination. I don't know. I'm a lot less interested in symbolism than the vibrancy of this red.
Post a Comment
Read more 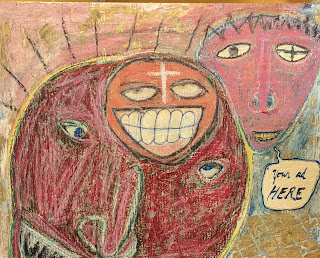 So, I mentioned I went through a phase of treating my paintings as one-panel comics. But I'm not especially funny or insightful, so it fell flat.  I have a soft spot for this one because it's a co-pro with one of my kids. (She made the eyes and mouths, and I had to fit them into a picture.) I thought it would be funny to pretend it was like a baffling proposal for an ad campaign. Kind of a commentary from my advertising days on the fact that the lion's share of creativity in the ad world goes into selling clients on bad ideas -- at least in my experience. I know, it's not that clever. Yourad: 24x18ins, acrylic, oil pastel, fools gold leaf.
Post a Comment
Read more 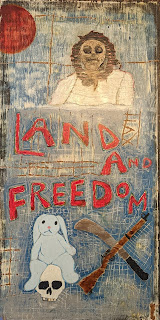 My depiction of Kamathi here is a bit skeletal. This is more about my inability to render his likeness than a commentary on his mission or legacy. (The poor man was murdered after a show trial.) I lifted the bunny-on-a-skull motif (is that the right word? motif?) from an arrangement one of my kids had in their bedroom.  So: two skulls. Dedan, 24x42ins, acrylic, pencil, oil pastel.
Post a Comment
Read more

This one is supposed to be a chunk of wall from an abandoned house on or near the Maine coast -- that's the conceit. So you've got dingey 1940s wallpaper (actually green paint and maple-leaf stickers). And some paintings: An abstract... One of the house itself... The man of the house doing something fisherman-like... The missus just standing there... Oh, and the faces of the dead couple pushing out from the wall. Who knows why. My favorite part is the kid's drawing that used to say "Thanks Gram and Gramps for looking after me" before it got snatched off -- now it's just dead eyes, ripped remnants, and "AFTER ME..." Creepy, right? Searsport. 48x22ins, mixed.
Post a Comment
Read more

Why all the Xses and Os? 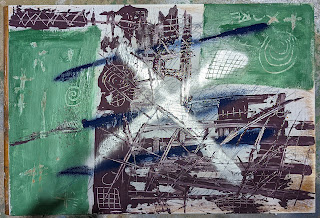 Not too sure, but a number of possibilities arise. These little marks are the graphic equivalent of a nervous tick I think the image needs an element, but not one that's too obtrusive I'm covering something up I'm acknowledging an error But I don't really know.
1 comment
Read more
More posts