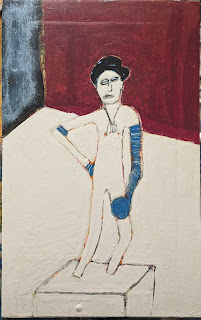 Sometimes I take inspiration (such as it is) from archeology. So one day I was looking at photos of findings from the Indus Valley civilization when I stumbled on this: The original is better than mine, of course, but it's fun to take your own whack at such things.
The original is often labeled as "Dancer," or "Dancing Girl." At least one scholar contends it depicts a particular goddess with (notional) ties to the Hindu pantheon. But it looks more like a fighter to me. I file my version under the name "Boxer. "
I tried to preserve the figure's necklace and footlessness, but everything else was up for grabs, including perspective. 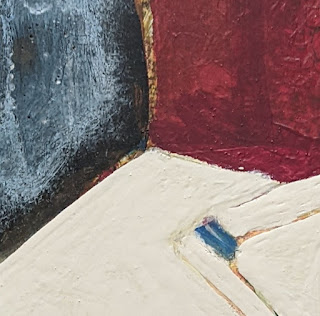 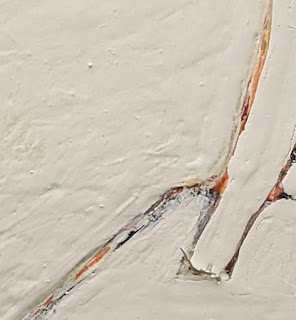 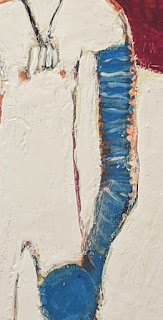 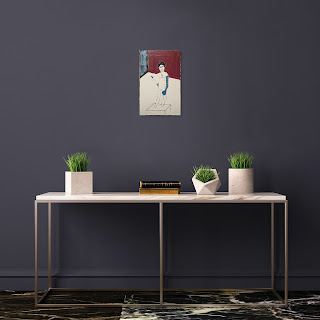 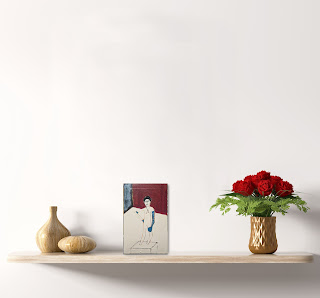 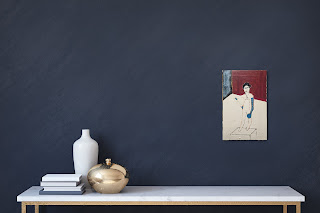 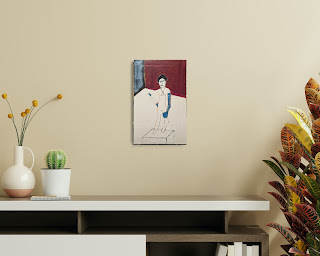 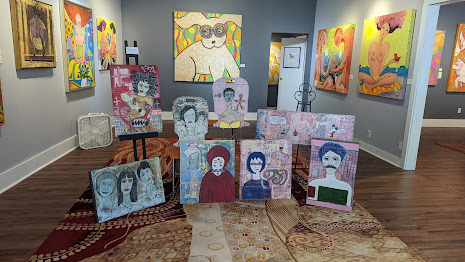 Visited D'Alessio Gallery in Bar Harbor (and so should you)

I hadn't been in Bar Harbor since before Covid, so it was nice to pay an overdue visit to my old friends Russ and Linda D'Alessio at their gallery on the Village Green yesterday. They were kind and fun as usual -- and generous enough to display some of my paintings in their space for a few photographs, including this one above. That rabbit is too cool.

This one is supposed to be a chunk of wall from an abandoned house on or near the Maine coast -- that's the conceit. So you've got dingey 1940s wallpaper (actually green paint and maple-leaf stickers). And some paintings: An abstract... One of the house itself... The man of the house doing something fisherman-like... The missus just standing there... Oh, and the faces of the dead couple pushing out from the wall. Who knows why. My favorite part is the kid's drawing that used to say "Thanks Gram and Gramps for looking after me" before it got snatched off -- now it's just dead eyes, ripped remnants, and "AFTER ME..." Creepy, right? Searsport. 48x22ins, mixed. 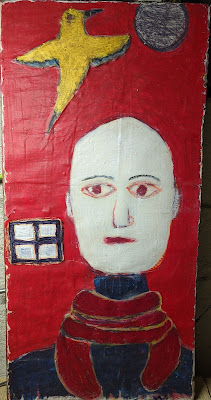 Bald guy and a bird

I rework paintings, a lot sometimes, and I have as many going at once as I can manage.  They get finished eventually, each in its turn, after a long winnowing process -- or when my desire to keep fiddling evaporates.  This one is on an interesting surface: nice old plywood from what had been a doll's cradle I rescued (with permission) from a neighbor's burn pile. Note the critters on the back.  On the other side, I slashed out a quick head-and-shoulders, and there it stood -- the scribbly one below. Later I decided to obscure the scribble in bright red, add a window, make the bird yellow, and soften the guy's features a bit. Birdy. Acrylic and ballpoint -- some oil pastel on the bird and scarf. And water-based poly, matte finish, as well as decoupage medium, matte. It measures 11x22.5ins.